There’s a trend going around the interwebs, at least around Facebook and Twitter, where people like to create and share images of political candidates (or Ryan Gosling – still at a loss to figure that one out) with quotes about this, that or the other thing attributed to them. They come from the extremes, both right and left, and seem little more to me than cheap name calling. The latest I saw was one that a friend, who I agree with on probably 98.9% of things in life, posted to her FB page. To be fair, I saw it elsewhere too, but hers was the first sighting.

It comes from the author of the blog The Stumbling Block, a site that no doubt get a gazillion hits a day compared to my average of, oh, maybe 3. It’s obvious that this fellow’s ideas are more popular than anything I might venture to state, a fact that in and of itself sort of makes my point (that I’m about to make). First, the image: 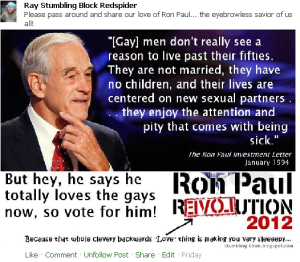 Admittedly, Ron Paul says some fairly dangerous, if not downright absurd, things. Whether or not he truly believes the things he says, who knows? But like political candidates of EVERY stripe nowadays, he spouts off some lulus. But here’s the thing about this particular image and the message it carries; a message that I’ve seen fired from both sides at all kinds of candidates, i.e. it is WRONG to change your mind.

Mitt Romney (god help us) has been labeled a flip-flopper for what seems like the past decade. It’s the reason no one is to trust him – because he changes his mind. Same is being said of Ron Paul in this ad (or whatever you call these things). He once said and/or held some totally ludicrous ideas about gay men. Completely unfounded, hateful and inane. Today, he says he holds different thoughts. By this picture though, I’m not supposed to believe that such a change is possible OR, and this is the part that bothers me so much, that if it is possible and he does feel differently, this is a bad thing.

I posed this question on my own FB page and friends shared that it’s the political climate and the candidates themselves. None of these people are to be trusted. No one running for national office says anything out of their own conviction anymore, but simply to appease a particular voting block. Well if this is so, then let’s all simply cut out the whole finger-pointing charade and ginormous money-suck of campaigning and simply turn it all off until that Tuesday in November when we go to the polls. If anyone and everyone lies, then what’s the point of yammering on and on and on?

The other piece of this particular Ron Paul image that tipped the scales for me is this: It’s a quote from a 1994 newsletter. 1994. Seventeen years ago.

In 1994, seventeen years ago, my then new partner and I traveled together to Virginia to visit my (side note: libertarian) brother, sister-in-law and their kids for the first time. Long story short, it was a pretty unfriendly visit and resulted in more than a decade of little to no communication between us. When we did talk or write letters, we all shared things that, I like to think, we all feel pretty ashamed of now. But over those 17 years, we’ve all grown up a bit. Thankfully. We hardly see eye-to-eye on everything, but I don’t believe that today any of us would say and/or feel some of the same things we said and/or felt all of those years ago. We changed. All of us. And it’s a very good thing.

Last week I was also asked if I’d share with a colleague a book that I wrote probably 15 or so years ago. I wrote it when I was an associate minister in a congregational church. I wrote thoughts that I believed, born of experiences that I knew. There is nothing staunchly religious in those words, but I don’t believe the same things the same way today. I’ve lived longer, I’ve experienced more, I was open to change.

That’s hope, if you ask me. We can all change. Granted, not everyone is always going to change the way I wish for them to. Not everyone is going to change in ways I understand. But there’s one thing I’m fairly certain of and that’s that the people who never change in life are those who take us nowhere but down. They ruin relationships, friendships, work environments AND our government. These are exactly the people we do NOT need in charge.

As a lesbian, I don’t know if Ron Paul sticks up for me today. Quite honestly, I don’t care. I live in Massachusetts where we passed same-sex marriage and a state-wide health insurance mandate under Mitt Romney’s watch. Does any of that make any sense? I wonder. But it shows that change can still happen, both to individuals and a greater society, if we just keep open to it. We are collectively bigger than any individual candidate and the myriad of far-wing organizations putting this crap out.

So my New Year’s wish is this… let’s do better, America. Let’s change.