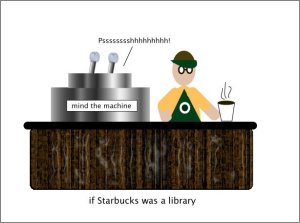 Once upon a time, in a medium-sized college town, an institution stood for generations. O’Dewey’s was founded by Sean O’Dewey in 1887 and for more than a century, passed from O’Dewey to O’Dewey, all the way to its current proprietor, Mary O’Dewey, who assumed the helm in 1992 when her father, Patrick, decided it was time that his daughter, the second-oldest of four children, take over the family business. Mary was the first of the female O’Dewey’s to ever run the business. It had caused a bit of eyebrow raising when Patrick announced he was bypassing Martin, his eldest, in favor of Mary, but over the years as the children were tutored in the ways of business, it was Mary who’d shown both the most interest and the most promise. Her father, without reservation, deemed her a worthy heir.

Now O’Dewey’s had a reputation, good and fair and well-earned over its many years standing proud in the corner closest to the campus quad. It was a place where students and faculty alike gathered. It was open long hours, always ready to welcome one in need of either a quiet place to sit (it had a room off of the main gathering space designated as such) or others looking for like souls to commiserate a tough exam, a difficult professor, or a paper due the next morning. Year after year, class after class, students spent countless hours at O’Dewey’s. It was the place to go on campus. It was a central happening spot.

Of course, the main fixture at O’Deweys was the bar that stood in the middle of the main room. It was in the shape of a square, a large square, thus offering four sides where people could pull up a stool and sit. You could order drinks and chat with Mary or Patrick or Sean or Ian, ask them questions, seek their advice. They knew a little bit about everything and if they didn’t know the answer, they surely knew who did. Each and every O’Dewey, with the exception of Seamus who appeared so inept at social skills he was relegated to the kitchen and charged with making sandwiches and soup and never speaking with customers, was a natural behind the bar. Each could tap a keg as equally as s/he could tap into some uncanny source of information. It was a combination that endeared them to the college community for what seemed like forever.

Still, even an institution as beloved and ingrained into the community as O’Dewey’s was not exempt from changes that inevitably come to society as time and progress march on. Since taking over the pub in the 90s, Mary worked hard to address the influx of technology that affected even an old watering hole. She installed booths, upgraded the electrical system to add more outlets, provided free wireless access, even started to serve micro-roasted coffee alongside the micro-brews. Lots of things changed at O’Dewey’s during her decades in charge, everything but the central tenet of the place – O’Dewey’s was the college community’s pub. They could serve all the foamy lattes they wished, provide the fastest connections available, but O’Dewey’s was, after all, O’Dewey’s Pub. That is what it was Sean started 100+ years ago and it’s what everyone – EVERYONE – assumed it to be. Always. A pub.

Mary and her family held onto this idea as strongly as the community. They held onto it as Starbuck’s opened on the same block. They believed it as the frat houses and dorms grew fancier and more hi-tech, placating students’ every desire for HD television and universal connectivity. They remained convinced that O’Dewey’s was the place to go – the only place to go – for the best beer and the best advice. They were in possession of both. Better than anyone else could ever be.

Despite competition from other bars and other entertainment sources, O’Dewey’s did well for a good, long while. It never seemed to fail that whenever they were experiencing a bit of a downturn in customers or activity, some alumni event would occur, some big game would be won, or some winter storm would hit that pushed people to the oldest, dearest, and closest spot to come together. And in their gathering, they remembered how much they loved the feelings the old pub prompted. People would laugh and tell stories, they’d order beer and listen to music, they’d say things like, “This is really how it should be.”

But soon enough, homecoming was over, the storm subsided, the season ended and life on campus resumed. Students, faculty and staff went about their very busy lives, going from place to place to place, whatever was most convenient for whatever they needed at the moment. That’s what mattered most. Convenience. And the changing times brought with them a whole host of things that made the niceties of O’Dewey’s, while still nice and still important, more convenient to get elsewhere. Cafes and coffee shops sprung up all over campus. Wireless access was everywhere. Kegs could be delivered to dorms for parties. Who needed a pub anymore?

Mary tried her best to both counter and ride the new trend. She tried starting book groups and posting an online community calendar where people could sign up to use the pub for organizing or study groups. She tried catering to parties on campus. She tried special events and giveaways. Some things worked and others failed miserably, but all in all, the pattern was that with each new thing O’Dewey’s tried, they’d see a small spike in their customers, but nothing that lasted. Mary and her siblings seemed at a loss as to what to do. What more could they offer? What else could they do? They were O’Dewey’s Pub. They were an institution. Why didn’t people see their value anymore?

Mary decided they needed better marketing. Quite obviously, people didn’t know everything that a pub had to offer them today. O’Dewey’s was NOT just about beer. Sure, they still served beer, but they had so much else to offer, too. If they could only get people to realize that “pub” meant more than “bar” things would be good again. They hired a small advertising firm to put together a campaign for them. A designer came up with a new logo showing a beer glass encircled by a globe, indicating a community and connectivity. They ran ads in the school paper and paid for spots during televised sporting events. They made t-shirts. They did anything and everything they could to remind people of the importance of O’Dewey’s, not just to the current students and faculty, but to students and faculty of the past, and students and faculty to come. Who could imagine the town, this campus without O’Dewey’s? It would simply never be the same.

One day, in the middle of putting out the new cork coasters with the new logo on the new touch-screen tables, Mary’s daughter Erin asked, “Mom, what do you think makes a pub a pub?” She scoffed a bit and said, “Well beer, of course, Erin.”

“What are you getting at?”

“I was wondering if maybe, just maybe, we’ve gotten away from that. I’m wondering if we’ve become something else.”

“No. We’re still a pub, but we’re also a lot more. People who come here regularly know that, but anybody else seeing ‘O’Dewey’s Pub’ thinks … pub. Why would anyone think to come to a pub for a book group?”

“So you’re suggesting we stop doing that? You think that we should simply go back to serving beer? Being a bar and nothing else?”

“That’s one option. The other is to change ourselves.”

“But we’ve done that. We’ve been doing that for years now. What more can we possibly change?”

“How about our name?”

“No. Not call ourselves a pub. Or at least call ourselves a pub and… something. Something else. Something that makes someone looking for a beer or a coffee or a group study spot or a sandwich or a free connection to the web or anything else we provide… well, it makes them know that we have those things. Pubs are about drinking and gathering. We are still that – we’ll always be that – but we need to let go of it as the only thing that we are.”

Mary looked at her daughter suspiciously, fearing that the next generation of O’Dewey’s marked the end of all she’d ever worked for, everything that her family meant. An O’Dewey was a bartender. She didn’t have any idea what her daughter was, nor could she believe she’d raised her. She shook her head, waved her off, and went back to updating ODeweys.com. “Crazy kid,” she thought. She’ll grow out of it.

In 2012, when she finished her degree, Erin O’Dewey opened “Erin’s Corner”. It quickly became one of the busiest gathering places near campus.

This entry was posted on Monday, January 23rd, 2012 at 3:58 PM and is filed under daily muse, libraries, library. You can follow any responses to this entry through the RSS 2.0 feed. You can leave a response, or trackback from your own site.