Life is Better as a Participant Sport

I spent the weekend helping out with the charity bike ride for Phinney’s Friends. It was a 2-day, 150 mile ride from Stow, MA to Fitzwilliam, NH and back. Six riders took part along with several folks in vehicles for support, including me. Just a month ago, I was planning on participating in the ride. 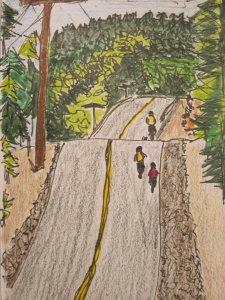 I’d been riding my bike and running, training for the Chicago Marathon in October. I was logging miles and admittedly feeling poorly, but still looked forward to my fall plans. Two trips to the ER and several different and unrelated diagnoses later, I was sidelined from both.

My friends in Chicago asked if I’d still be coming out to watch the marathon. I admit that I want to be there for my friend, Jonathan, who I had been training to run with, but I knew it would be too hard to watch. I didn’t want to stand by and see the thousands of people go by, knowing that I had wanted to be with them.

I didn’t think twice about Phinney’s, though. As soon as my doctor grounded me, I told Roger, the ride coordinator that I was out for the ride but definitely in to help crew and to keep on with my fundraising efforts. I thought that helping out was important, because it was such a small group, because I’d made the commitment to do it, and a lot of friends were supporting me with donations.

It wasn’t terrible by any stretch, but riding in the SAG wagon, following the riders up and down the hills and back roads on two days that couldn’t have been better for bike riding, I couldn’t help but feel sad. I wanted to ride. I wanted to make friends the way you make friends when you share hours pedaling (or running) along together. I wanted to share the experience. I wanted to take part. I didn’t want to sit and watch.

We got back to the shopping center, car horns honking and bike bells ringing. People clapped and cheered and the volunteers from Phinney’s Friends again thanked everyone for taking part and helping their good cause. I felt kind of distant. I wanted to go home. I helped unpack the stuff from the cars. I tried to avoid having my picture taken. And I tried not to cry.

This entry was posted on Sunday, September 11th, 2011 at 7:01 PM and is filed under daily muse. You can follow any responses to this entry through the RSS 2.0 feed. You can leave a response, or trackback from your own site.